In common whatever they were named or numbered commercially, they all work in heat exchange process. They change their form from liquid to gas or vice versa while absorbing or letting heat go away within the system of the unit. The best result is the cool air that you find in the environment of the room. The new trend is to search of low electric energy usage which pressure business and people around the world.

In the history of cooling industry regardless of air conditioner, chiller or freezer, usage of refrigerant gases are developed for better results, adaptation of new technologies as well as the hazards to the environment. First generation of refrigerant was named Freon, which was numbered R-12. It has CFC (Chloro Flora Carbon) in chemical content used during between the years of 1990 and 2000. Information about refrigerants like cfcs and hfcs came into the fact in part of refrigeration process which working appliance utilized. Every necessary moves release low-pressure in related commercial life typically who are dealing with air-con industry as an improvement.

Next generation was called R-22 which has chemical name is HCFC (Hydro chloro flora carbon) and still in used most of the systems. Environmental negative effects of this refrigerant recently discovered and manufacturers started not to produce any more. New technologies applied to the air conditioner units with the new gases applied to the industry. R22 negatively effects to the environment if there is leaking from the system could cause to reduce the Ozone layer of the atmosphere.

Next generation of refrigerant is called r410 later modified version of R-410A penetrated into the market. They removed the chlorine from the gas and it turned to HFC (Hydro flora carbon) is commonly used by today. Other type of refrigerant used in refrigerator units is called R-134A and R-32 for air conditioner units. R-32 found better than R-410A in respect of environmental hazard for air conditioner units. They also developed mixture of 5 gases in one called R-438A to reduce the environmental effects of the gas.

Recently developed environmental hazard free gases came into the market together with the development of air conditioner unit technology. These gases are R-290 and R-600A, which former is called Propane and latter is called Iso-butane used mostly in electrical house hold refrigerators as environmentally friendly. Both have ozone depletion potential free and lowest global warning potential, most greenest one and just HC (Hydro Carbon) in chemical structure.

We as a professional air conditioner service company; we use the right refrigerator gases used according to the needs of your system. Just call us. 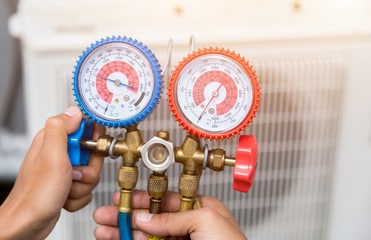 Our service also includes a complimentary site survey to better understand your air conditioner unit service needs so that we can give you the most accurate quotes.

Your team’s response time was superbly fast! The details on the problem of my air conditioner were well explained to us and subsequently it was rectified. Then, your team proposed to us for a maintenance plan that I immediately agreed. In future, I wouldn't have to call anyone else for such jobs except them!

The service provided was superb and the response was excellent!  I couldn’t be any happier with such a fantastic servicing rendered to us by your team of experts and their promptness really is a plus plus point.  NHN Aircond Service is simply the best in this area; no one else can match them. Kudos to your team!

Great and fantastic service indeed! They have sent 3 men team of professional technicians to service my 4 units of air conditioners in my condo. They did a thorough inspection on the air conditioners whilst servicing them and they have tidied up my place after they completed the job. Surely we will recommend them to others.